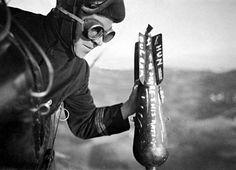 Did you know that a human genocide occurred right here on American soil in 1921?  This part of American history was surely left out of any high school text book I’ve ever read.   I find it amazing that in 1921, a thriving black owned town known as the Greenwood District aka Black Wall Street flourished in Tulsa, Oklahoma.  The Greenwood District was said to be the wealthiest black owned town in the United States.  It consisted of more than 600 businesses, 21 churches, 21 restaurants, 30 grocery stores, 2 movie theaters, 6 air planes, and several banks.   As Greenwood became more popular, drawing the attention of struggling and successful surrounding whites, talks of shutting it down became a high priority as many whites did not want to see blacks progressing (or have more than they have).  Several whites who opposed Greenwood decided to spread a rumor saying that one of the black men living in Greenwood had ‘rapped a nearby white girl’ [sources read].  This stirred up the white population to take action in their own hands by seeking street justice.  The idea would be to gather a mob, head to Greenwood and burn it down.  On May 31, 1921, over the course of 16 hours, a white mob attacked the community of Greenwood sending more than 800 people to local white hospitals with injuries [because the town’s black hospitals were burned down].  Thirty-five city blocks composed of 1,256 residences were destroyed by fire, resulting in over $26 million in damages [and keep in mind it’s 1921 so $26 million is HUGE!].  An estimated 10,000 blacks were left homeless.  It was reported that 55 people died during the riot; however, the actual number was said to be around 300!  Although the people of Greenwood had not committed any crime, the police assisted the mob by arresting and detaining more than 6,000  Greenwood residents at three separate facilities.  Many believe that the U.S. Air Force assisted the mob by dropping bombs on key locations to ensure the banking systems created in Greenwood would never reach the public stock market.  Trading on the stock market would have been a huge advancement for African Americans at that time.  Many would have been able to finally invest earnings in a growing market.  The Greenwood riot is one of the most devastating recorded massacres in U.S. History. 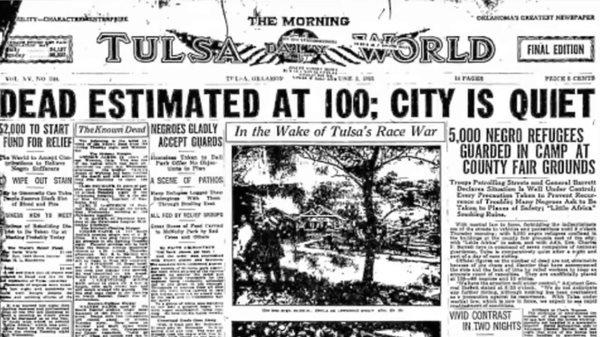 Can you even image the horror the children of that town experienced as they watched everything they knew burn to the ground?   Some children had to bear the tyranny of watching their mothers or father be rapped, slaughtered, and burned by the hands of the jealous mob.  When I think about the racism African American’s had to face during the civil rights movement coupled with the injustices that still occurs today [such as the unarmed police shootings and wealth inequality], I ask myself what does it mean when politicians use the statement let’s “Make America Great Again”?  What time period of time would this be?   When was America great for all citizens and not just one particular race/class?  It can’t be any time between 1850 and 2015 [just a thought].  I ask you all to view the link below about the place known as Black Wall Street and ask yourself, how many families were robbed of future dreams?  How many years would it take someone to recover in a racist world after you’ve lost everything to fire?  Check it out, share, and post your thoughts in the comment section. 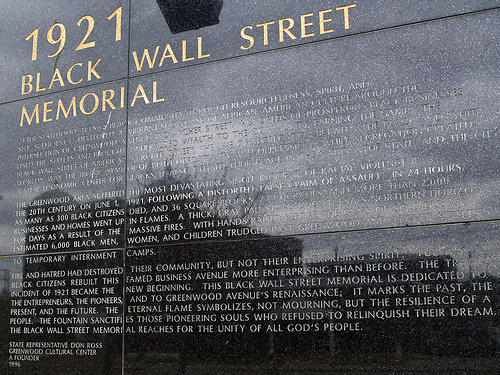 (Present Day Monument in Remembrance of the Greenwood Riot) 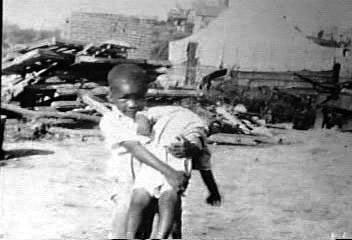 (Baby rescuing another child as mobs continue to kill in Greenwood) 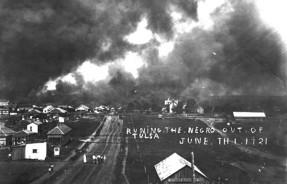 (Propaganda used after the Tulsa Riot)